Angle is an over-collateralized, decentralized and capital-efficient stablecoin protocol. Thanks to the liquidity providers it uses, the protocol proposes full convertibility between stable assets and collateral, meaning that it is possible to swap collateral against stable assets, and stable assets against collateral at oracle value. This makes the protocol not only capital efficient but also highly liquid. Angle Protocol could be used to issue any stablecoin, and will start at launch on mainnet with a stable Euro called $agEUR. Besides creating the liquid agEUR stablecoin, the goal of Angle is to create stablecoins for almost all Forex currencies, including the US Dollar.

The protocol involves 3 agents, which all benefit from the protocol, while bringing something to it:

To sum things up, Angle matches people who seek stability and people who want volatility (HAs). However, there isn't always a perfect match between supply and demand of volatility, meaning that the protocol's collateral may not be fully covered at all times by Hedging Agents. The additional collateral brought by Standard Liquidity Providers, serves as a buffer in the protocol.

How to deal with multiple stable assets?

Angle's design can be used to issue multiple stablecoins, provided that there is an oracle feed for each of them. The protocol has started with the agEUR (Euro stablecoin), and the idea is to follow with stablecoins pegged to other currencies like the British pound or the Swiss franc.

The concept of the protocol is that each stablecoin is independent from other stablecoins, meaning that the collateral pools are separated in all cases. Being a Hedging Agent for the collateral DAI used to back Angle's agEUR implies nothing about being a Hedging Agent on the pool DAI/agCHF. The same goes for standard liquidity providers. You can be a standard liquidity provider for just the agEUR stablecoin, but not for the agCHF stablecoin.

To generate a stable asset, a user just has to send to the protocol a whitelisted collateral. An oracle then determines how many stablecoins need to be minted and sent to the user. Like in an AMM swap, the collateral received by the protocol does no longer belong to the user.

The classification of Angle according to the ITC

The ANGLE token is the primary token for the Uniswap decentralized exchange and plays a vital role due to the fact that it offers holders an on-chain governance functionality so that they can participate in the decision-making process on how the platform is managed and developed in the future.

Economic Purpose (EEP): Angle is listed as a Governance Token (EEP22TU03) due to its governance functionality.

Industry Type (EIN): The issuer of Angle is active in the field of Decentralized Exchanges, Markets and Market Making (EIN06DF01).

Legal Clam (LLC): Angle does not entitle its holder to any legal claim or rights against the issuing organization, therefore it is listed as a No-Claim Token (LLC31).

Issuer Type (LIT): The dimension “Issuer Type” provides information on the nature of the issuer of the token. Angle’s platform is built by a team of programmers and engineers that make up the core contributor community. It’s Issuer Type is a Private Sector Legal Entity (LIT61PV). 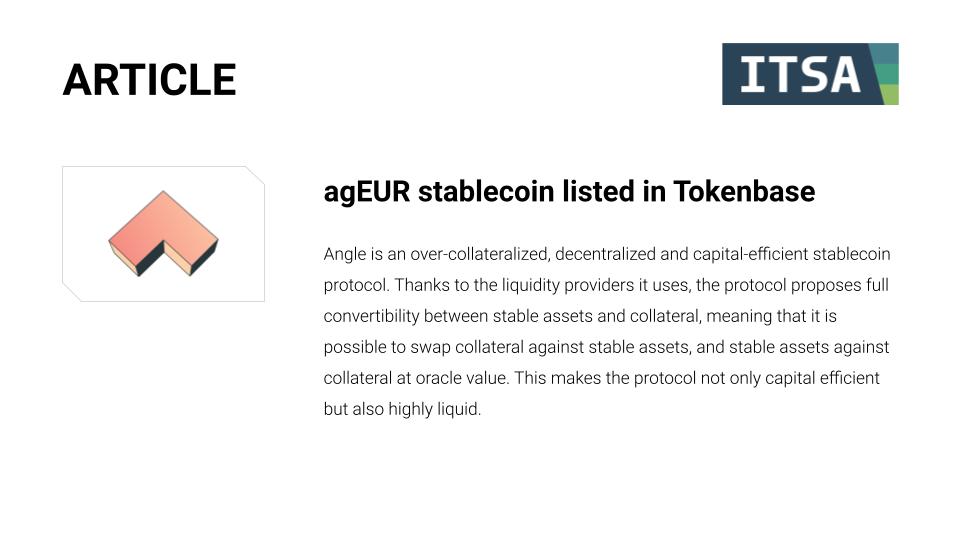 Decentralized Reserve Currencies and What's Up With (3,3)